I distinctly remember my first time hearing this band. It was late last year, the song was “History Of The Radio,” and 30 seconds in I went Kool-Aid man onto the Ghost Shirt bandwagon. I immediately played “Radio” again, just to make sure I heard what I thought I heard. I’ve had this experience with 3 (now 4) songs:

Who has the balls, let alone talent, to join that triumvirate of awesome??? Five songs into their career and they’re already in the pantheon.

Half this song swallows you up with Spector/Bowie claustrophobia, screeching violin, distorted guitar, keyboard drone, and murmurs of noise all fighting for space. The other half of the song can’t decide whether it wants to be Astral Weeks or Fisherman’s Blues. Yeah, good problem to have. My only complaint is that Murphy’s great drumming is a bit lost in the wash, but I think part of that is being in the mp3 era. I expect this to be corrected on the eventual vinyl release.

These are the 4th and 6th singles, respectively, in Ghost Shirt’s ambitious 52 Singles in 52 Weeks project (more in a sec). The first song pays tribute to Buffalo’s Roger Bryan & The Orphans, whose 2009 album was entitled, Wolves, while the second song is an homage to Columbus homeboys, TCG.

Dig this. These crazy mofos from Columbus, Ohio, set themselves the needlessly impossible task of releasing a new single every week this year. If you’re like me, you think that maybe on paper that’s a great idea. In reality, there’s serious filler potential. Most bands can’t write 3 good songs in a year. Ghost Shirt is aiming for 52?!?! But, here we are in April, I have 17 songs by this band on my hard drive, and maybe 2 are meh, 3-4 are good but probably not great, the rest (around 10) are as good or a hair below these 3 songs. 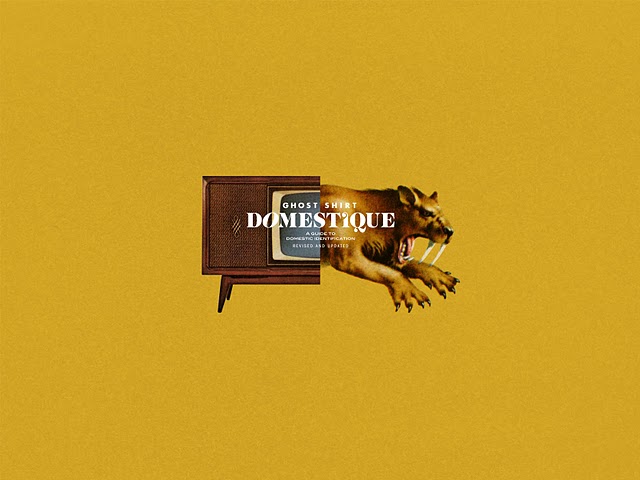 Oh, and aside from the EP .. . which you really need to buy … all these songs
are FREE! Fuck yeah, flapjack. Furthermore, from Camp Ghost Shirt:

You guys been staying up on these singles? If not, start catching up now. Branden said at the beginning of this “52 Singles in 52 Weeks” project that he wanted each single to be just that — a single. And that’s pretty much held true so far. Already a lot of gems among these 12.

Here’s another new twist to the project. Last week’s single (#11 “homeiswhereyouare”) through #21 is going to be a complete album (which means #12 up there is also track 2). So, keep up with the singles on Donewaiting the next 10 weeks and you’ll have a new Ghost Shirt record (Domestique, pictured left). All the tracks run together, and violinist Sam Kim is composing some orchestral breaks, too. Once all 10 tracks are released, it’s going to be mastered and digitally repackaged with artwork and such. The sound is a bit different than the Ghost Shirt you’re used to — as Branden says, it’s more “weird and noisy.”

THE INSTRUMENT OF MY ULTIMATE DOWNFALL

As a bonus, here are two of my favorite tracks from the titular bands.

The Flags are Half-Mast in Radio City

http://youtu.be/sTSJYZyouek&w=560 Replacements - "Alex Chilton" Pleased To Meet Me 1987 The reaction to Alex Chilton's passing has been surprising in...