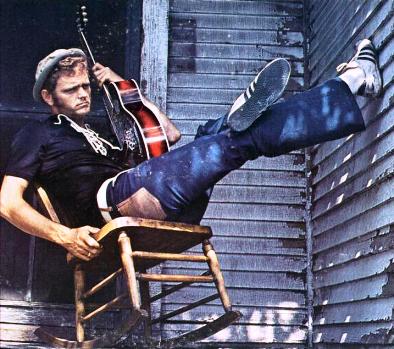 Sad news at The Adios Lounge. On August 31, we found out that the man born Jerry Reed Hubbard and known professionally as Jerry Reed died at the age of 71 due to complications from emphysema. Reed was also known as the Alabama Wild Man (from his 1968 LP), the Georgia Wild Man (born and raised in Georgia), the Guitar Man (the name of his first hit, later a hit for Elvis, and the instrument upon which he dazzled), and of course as Cledus “Snowman” Snow (after his star turn in Smokey And The Bandit).

For a great write-up on Jerry Reed’s life, check out Peter Cooper’s loving and thorough tribute in The Tennessean. In the meantime, here’s a quick look at some of Jerry’s musical highlights captured on film, tape, and in one case, animation.

This first video clip features a pair of songs from the year Reed made his debut on the country charts: 1967. The first tune is the old folk standard, “Wabash Cannonball,” while the second song is his first hit, “Guitar Man.” Knowing what we know now, it’s a bit surprising to see a subdued, wisecrack-free Jerry Reed on the televisions, but there it is.

“Guitar Man” was Reed’s “Johnny B. Goode” and would go on to much greater fame when Elvis recorded it, and then included it in his ’68 Comeback Special. In fact, Presley had Reed contribute his unique guitar picking to the “Guitar Man” session in September 1967 and then a few months later, the “Too Much Monkey Business”/”U.S. Male” session (the latter song also written by Reed). It was at this point in his career, after years of flailing B-movie nonsensery, that Elvis probably remembered, “Hey, wait a second. I’m the dadgum King!” While Reed doesn’t deserve all the credit, it can’t be a coincidence that Elvis’ musical comeback occurred shortly after jamming with a fellow good ol’ boy, whose background was similar to his own, and who kept it real and had a good time doing it.

Chet Atkins began producing Jerry Reed in 1965, but it wasn’t until Chet’s 1970 LP, Me And Jerry, that the two combined their formidable guitar talents on a series of instrumental duets. That album was followed by Reed’s 1972 LP, Me And Chet, on which “Jerry’s Breakdown” first appeared. However, this filmed performance took place three years later, in 1975, on the variety show, Pop! Goes The Country.

You know what old-timer actors used to say. You haven’t made it until you’ve made it on Scooby-Doo. So it was that Jerry Reed went from likable country musician to ginormous international megastar following his December 1972 appearance on “The Doo.” You think Burt Reynolds would’ve given Jerry co-star billing throughout the 1970s without Scooby Doo on his resume? Me either.

The Ralph Emery introduction makes me think this is another Pop! Goes The Country performance. Whatever the case, Jerry absolutely tears up this jazzy instrumental that has a Duke Ellington “Caravan” kinda feel and first appeared on his 1975 Mind Your Love album. It then re-appeared in ’77 on East Bound & Down, the Smokey And The Bandit cash-in LP, featuring the famous theme song and assorted JR nuggets.

Saving my favorite for last, here’s Jerry and an acoustic stringband picking on the old-timey “Alabama Jubilee.” Looking at the, ahem, distinctive fashions — seriously cool pirate shirt, Jerry! — this is obviously from the mid-to-late ’70s and I wouldn’t be surprised if it was from Jerry’s own short-lived variety show from 1976. More importantly, this video showcases Reed’s phenomenal “claw” picking style, where he used a thumbpick for heavy rhythm and his middle and ring fingers (and occasionally pinky) for fast, funky picking. Just a brilliant, mind-blowing performance. When you’re hot, you’re hot, indeed!

For those of you new to the Reed catalog, you may as well start with The Essential Jerry Reed and go from there. If you have a record player, you should try to track down any of his ’60s and ’70s LPs, because there’s always a nice mix of country, swamp pop, a little rock, and an instrumental or two. Plus, the records are usually less than $10. Even when the production becomes dated as you move through the ’70s, there’s still enough quality material on hand to salvage the purchase. Whatever you get will be worth it. He was a truly unique talent, a giant on guitar, funny, personable, down to earth, and he’s already missed. God bless you, Jerry Reed.

2 comments on “Videos From The Vault: RIP Jerry Reed”