Home» James Gang » Turn Your Pretty Head and Walk Away

We’ll get to the James Gang in a second, but first some love for Austin’s Li’l Cap’n Travis. Jeff Johnston sings only four lines over a rudimentary piano figure, but it brilliantly captures a singular moment of adolescence. My face is breaking out just thinking about it. Extra credit for the lyrical hat tip to Thelonious Monster’s “Sammy Hagar Weekend”: 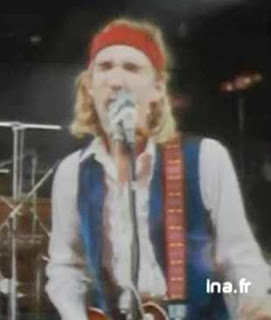 The common imagery is probably accidental, but it’s interesting that both songs use the teenage mustache as a signifier for an adolescent rite of passage. And you know what goes great with adolescence? Joe Fucking Walsh.

It’s hard to believe the classic James Gang lineup was only together two years. Dale Peters joined on bass in late 1969, just in time for the Rides Again sessions, and Walsh went solo in late 1971. In between were some of the swampiest, funkiest rock songs of the era.

“Walk Away” features an all-time guitar riff, a great vocal, and the unheralded Jim Fox throwing down on drums. I love how he lays back in the verses and then propels the beat forward in the chorus. But, the star of the song is Walsh and his ten or so guitar tracks ending in a Yardbirds-esque martian guitar scrum, which he called a “train wreck” in the Thirds liner notes. If that was a wreck, they should’ve wrecked more.

Rides Again and Thirds are very good studio albums, but the James Gang were meant to be heard live. For example, this version of “Walk Away” from July 1971 — four months before Walsh left to Barnstorm — cannot be topped. That riff makes babies. Great vocal in a Fogerty/Cobain kinda way. Nasty guitar and bass tone, with Joe’s leads from 2:07-2:26 and 2:35-3:11 being particularly ridiculous. And if all that weren’t enough, what a rhythm section!

Walsh was so talented he could play rhythm parts and lead parts simultaneously, but it was comforting to have DP on bong-rattling bass and Jim Fox destroying the kit. (Please note the stagehand at :18 repositioning Fox’s cymbals after Hulk smashed).

The group reminds me a bit of the Jimi Hendrix Experience, some in Walsh’s guitar playing, some in Fox’s obvious debt to Mitch Mitchell. If the brilliance of this performance does nothing else, let it serve as a reminder that from 1969-71, the James Gang were one of the best power trios in rock music history. Yadig?

5 comments on “Turn Your Pretty Head and Walk Away”