Home» Beatles » The World According to Memphis

Jim Dickinson at the piano

I refuse to celebrate death. My life has been a miracle of more than I ever expected or deserved. I have gone farther and done more than I had any right to expect. I leave behind a beautiful family and many beloved friends. Take reassurance in the glory of the moment and the forever promise of tomorrow. Surely there is light beyond the darkness as there is dawn after the night. I will not be gone as long as the music lingers. I have gladly given my life to Memphis music and it has given me back a hundredfold. It has been my fortune to know truly great men and hear the music of the spheres. May we all meet again at the end of the trail. May God bless and keep you.

The recent passing of Jim Dickinson produced a flood of heartfelt recollections, inspired no doubt by Dickinson’s legendary gift of gab. Here’s a few of my favorites:

Eric “Roscoe” Ambel gets his yarn on at No Depression in “How I got produced by Jim Dickinson and other ramblings.” Ambel discusses the impact of meeting Dickinson at the sessions for Mojo Nixon‘s Otis album. “It was a great couple weeks,” he says. “When I got back to NYC I knew I had been ‘Produced by Jim Dickinson.'” I get the sense that Ambel views himself as a disciple (or product) of the Jim Dickinson aesthetic, which declares that you can survive in the music biz on your own terms, but it requires fistfuls of DIY and you ain’t getting rich. But, it can be done.

Like Ambel, Chuck Prophet expounds on Dickinson, the producer and mentor, with amusing anecdotes about Dylan (pictured left with Daniel Lanois and Dickinson), The Replacements, and Big Star. Prophet says movingly, “As a producer, when he sensed that Green On Red lacked faith in ourselves, fearing it was all hollow, a scam, Jim said, ‘Never let anybody make you feel bad about what you’re doing.’ He offered belief. And made you feel your work was important. It was clearly important to him. What a gift he gave us.”

Boogie Woogie Flu has a beautifully concise eulogy, the entirety of the Beale Street Saturday Night record (1978), and an excellent “Jim Dickinson Starter Kit” of mp3s. Head over there, post haste. It’s what the interwebs were invented for.

Obsessive-compulsives can get their rocks off with this bounteous Jim Dickinson discography.

Finally, be sure to set aside a good hour or so for Joe Nick Patoski’s transcription of an epic Dickinson oral history. You’re gonna need an hour not just to read it, but to digest the science being dropped upon you. Commissioned for a civil rights project in 2003-04, it’s ostensibly Dickinson talking about himself, but this is really the world according to mid-century Memphis. It’s a world of physical, psychological, and obviously, codified segregation, but it’s also a world that managed to conceive Elvis Presley, Dewey Phillips (pictured above in mid-rant), Sam Phillips (not kin to Dewey), Jerry Lee Lewis, and yes, Jim Dickinson. It’s the story of a music — let’s just call it “rock ‘n’ roll” for shits and giggles — as a way beyond segregation on its multiple levels, where the trappings of race aren’t necessarily constraints. Unless you’re a white guy trying to play a shuffle, then forget about it. Essential reading.

Thanks to reader Fred Robbins for turning me onto this video clip of Les Paul and Mary Ford. From October 1953, it’s their appearance on the Omnibus TV show, which was prompted to dispel rumors that the Paul/Ford recordings were all electrical hokum, what with those blinky doodads and such. It’s a wild, funny, and educational time capsule with Les Paul in the role of axe-slinging mad scientist.

Legacy Recordings has a three-part podcast history of The Jayhawks, with commentary by Jeff Tweedy, Joe Henry, and Rick Rubin. These were produced simultaneous with the recent anthology and really, how can they not be awesome???

The LA Times has a surprisingly heartwarming piece about Aberdeen, Washington’s unexpected embrace of Kurt Cobain. There’s an undercurrent of bemusement throughout that reminds me of the subtle humor in some of Cobain‘s songs … “Swap Meet,” “In Bloom,” “Sliver,” and “Floyd The Barber,” for example. Good stuff.

I SCREAM, YOU SCREAM 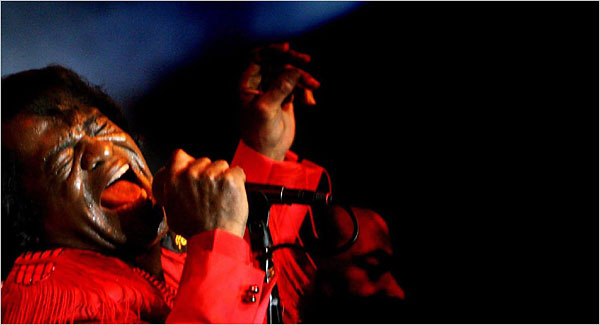 In “Primal Snippets, on Vinyl,” the New York Times tells us about LeRoy Stevens, who brilliantly mashed up favorite musical screams (like James Brown, pictured above) into a 3:32 hit single. But, those screams weren’t his favorites. Get this. Says the Times, “Last fall Mr. Stevens moved to New York from Chicago, and to get his geographical bearings he plotted a map of every record shop in Manhattan and vowed to bring to each a questionnaire asking for every clerk’s favorite scream and why.” You say nerd, I say hero.

THE BEATLES VIA CHUCK KLOSTERMAN

You may have heard that The Beatles reissued their whole bloody catalog in mono, stereo, Rock Band, and Klingon formats. True. Chuck Klosterman offers up a welcome piss-take alternate history of the band for The Onion. To wit: “It’s hard to understand why the rock press wasn’t covering the Beatles during this stretch of their career (1963-64); one can only assume that the band members’ lack of charisma and uneasy rapport made them unappealing to the mainstream media.”

Finally, confirmation that the road to heaven passes through Memphis.

4 comments on “The World According to Memphis”