How fundamentally badass is Creedence Clearwater Revival? They appeal to everybody over the age of embryo and younger than 102. Men and women. Whites, blacks, and all manner of ethnicity in between. Fancypants intellectuals and working class mulletheads. They’re beloved for heavy rock songs with big, fat guitar tones, twangy, backporch country, and high, lonesome ballads. They were at heart a “singles” band, yet if you needed ’em to stretch out their choogle to 10+ minutes … done.

For all the talk of John Fogerty tapping into the Great American Myth, what makes CCR the greatest rock ‘n’ roll band this country has ever produced was anything but myth. They were the flesh and blood link between the first wave of rockabillies and rock ‘n’ rollers in the ’50s, the first wave of garage bands in the ’60s, and the first couple waves of American punks who saved rock ‘n’ roll from itself in the ’80s. If you don’t see the continuum between Elvis, Carl Perkins, Chuck Berry, Little Richard, and Bo Diddley (Pt 1) (Pt 2) on one side and The Replacements, Blasters, Minutemen, X, and Uncle Tupelo on the other … well, that’s why I’m here.

I’ve put together an LP-sized playlist … 10 songs totaling 39 minutes … but me being me, you ain’t getting the likes of “Bad Moon Rising” or “Fortunate Son.” Not that those aren’t stone-cold classics, but come on. Everyone has been (over)-exposed to the 20 songs on Chronicle and if you’re around my age (41), you were officially issued it as an undergraduate along with Back In Black, Steve Miller’s Greatest Hits, and whatever Eagles comp I tossed out the window. So, let’s pretend that none of those songs exist. In fact, I’ll also eliminate 17 of the 20 songs on Chronicle, Vol. 2. That’s 37 of Creedence’s most well-known songs taken out of the mix. You’re getting nothing but the deepest of deep cuts and suffering nary a drop in quality. How many bands not named The Beatles can you say this about? Exactly. And so we begin.

The bass and drums are essentially the bottom for any rock band. That’s the constant, solid thing … the foundation … and you build around it. When I’m writing music, I think bass and drums first. That starts the songs, everything else comes later.”
–John Fogerty, 1970

The leadoff track from Cosmo’s Factory is a punkrockabilly spiritual that puts flesh to Fogerty’s quote above. On paper, it’s a fairly simple and straightforward rave-up that builds around the Cook/Clifford rhythm section and yet manages to evoke everything from early Elvis to Zeppelin to Jason and the Scorchers. It also includes the line “actors in the White House,” ten years before Ronald Reagan … aka “Ronnie the Popular” … actually took office. Political undertones aside, if you can’t shake your moneymaker to this 7-minute slab of awesomesauce, you might consider deporting yourself. Seriously, think of the children.

‘Get Down Woman’ is my tribute to that old swing-shuffle thing. The words are secondary to the music. I just got that one little guitar riff and built the whole song around it. I don’t particularly like swing jazz, but I love it in a blues. I also love good brass and walking bass in that rhythm.”
–John Fogerty, 1969

Fogerty’s homage to B.B. King is a thing of beauty. A simple A-A-B blues, “Woman” is all about the searing guitar riff and the swinging pocket. Speaking of which, can we dispense of this notion … sadly, often propagated by Fogerty himself … that Stu Cook on bass and Doug Clifford on drums were an inadequate rhythm section? I have everything Creedence ever did and there’s no point in any song where I say to myself, “This song is pretty good, but it sure could use a Les Claypool bass freakout and a 5 minute drum solo.” I’m not saying Creedence didn’t have a few clams and some filler, but so what? It’s rock ‘n’ roll, not rocket surgery. If anything, rock ‘n’ roll is like barbecue. It succeeds, not because there’s a pan-ethnic fusion of multiple ingredients fighting for attention. It succeeds because there’s a few ingredients that blend together simply and seamlessly. Dig it.

John Fogerty often stated that his favorite rock ‘n’ roll band was Booker T & The MGs and this track from Pendulum implicitly establishes that link. If there’s a very small downside to the MGs … who are still a Top 5 American Rock ‘n’ Roll Band of All-Time … it’s that they didn’t have a singer. Of course, when you have the privilege of backing Otis Redding and Sam & Dave, who the hell needs to sing??? Nitpicking, really. 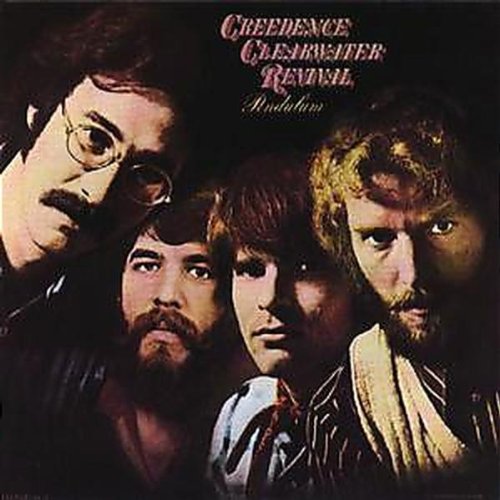 Couldn’t put together an alternate Creedence LP and not highlight Fogerty the folk-ballad singer. Last time out I posted “Wrote A Song For Everyone” (via Mavis Staples and Jeff Tweedy) and “It’s Just A Thought” has always felt like its companion piece. Cook’s walking bass makes this song — well, that and Fogerty’s stunning vocal — but much love to the Booker T-esque organ underpinning the whole shebang.

Well, a crowd gathered round and a scientist said it was marsh gas
Spiro (Agnew) came and made a speech about raising the Mars tax
The Vatican said, ‘Woe, the Lord has come!’
Hollywood rushed out an epic film
And Ronnie the Popular said it was a communist plot

Oh, the newspapers came and made Jody a national hero
Walter (Cronkite) and Eric (Sevareid) said they’d put him on a network TV show
The White House said, ‘Put the thing in the Blue Room’
The Vatican said, ‘No, it belongs to Rome’
And Jody said it’s mine and you can have it for 17 million”

“Fortunate Son,” “Run Through The Jungle,” and “Who’ll Stop The Rain” always get the pub when it comes to spotlighting Fogerty’s political sensibility … and rightfully so. But, I think this song is right there with ’em, echoing not only Chuck Berry’s primordial guitar riff, but also his sociopolitical wit (think “Back In The USA” and “Promised Land”).

In less than three minutes, “It Came Out Of The Sky” spoofs President Nixon, Vice President Agnew, then-California governor, Ronald Reagan (click link for good times), the Catholic Church, Hollywood, the press (as they called ‘the media’ in those days), and basic human paranoia and opportunism. The jury’s still out on the scientist. I mean, maybe it was marsh gas.

Incidentally, Stephen King, a well-known CCR nut, published a short story in 1976 called “Weeds.” That story was later turned into one of four short films that made up 1982’s Creepshow, retitled for the moving pictures as “The Lonesome Death of Jordy Verrill” (starring King, pictured above as Jordy). While the title references Dylan‘s “Lonesome Death Of Hattie Carroll” and the actual plot owes a lot to HP Lovecraft‘s “The Colour Out Of Space,” King’s protagonist is a farmer named Jordy (Jody?) who watches a meteorite come out of the sky, discovers where it landed, and then fantasizes that it’ll earn him untold riches ($17 million, perhaps?). I’m sure all that is just coincidence.

“If I were a ballplayer I wouldn’t play no second string
And if I were some jewelry, baby
Lord, I’d have to be a diamond ring.”

Fogerty pays homage to Bo Diddley with some unforgettable guitar licks and bad man badassery. The Cook/Clifford rhythm section shines. Cook’s bassline doesn’t just walk, it struts. Really, though, this song is all about Fogerty. He certainly has a treasure chest full of great vocals, but you won’t find too many moments better than his banshee-howling at 1:21: “Lawwwwwd I could play them blues!!!”

Let us now praise Tom Fogerty, rhythm guitar player, backup singer, and lesser-known foil to younger brother, John. We can talk all day about JF’s breathtaking musicianship and the sweet Cook/Clifford pocket, but Creedence’s secret weapon was often Tom Fogerty. “Cross-Tie” is a perfect example. It features Tom in lockdown rhythm with the bass and drums while simultaneously harmonizing acoustically with his brother.

“There’s more miles between us than the Santa Fe line.”

John may be too stubborn to admit it, but he lost his magical choogle when Tom bolted the band in early 1971. Creedence limped along for about another year and John had very brief glimpses of solo magic after that, but he was a superior musician with his brother in the band. The real shame is that while CCR is an American music institution, the name Tom Fogerty is virtually anonymous. Adios Lounge readers, don’t make the same mistake. Give a brother some love.

I don’t take it seriously, although it has a serious subject. A Black Mass-type theme … worshipping the Devil.”
–John Fogerty, 1970

If I were to ask you to name a 1969 album that featured a song about Black Masses and Satan worship, I’m pretty sure you’d say Black Sabbath‘s self-titled debut. And I’m pretty sure I’d say Black Sabbath’s debut. And yet, that album was actually released in 1970, while Green River (pictured left), the album featuring “Sinister Purpose,” was released in 1969. In fact, according to Wikipedia, Green River was released on August 3, 1969, which just happens to be the day I was born. Who’d a thunk it? Me and Creedence = BFFs.

“Sinister Purpose” owes a huge debt in theme and riff to Albert King‘s 1967 Stax anthem, “Born Under A Bad Sign.” Fogerty takes it to a different place, but King provides the building blocks, for sure. [FYI, check out Garbage Blues’ analysis of “Bad Sign.”] On a personal note, I would like to add that “Sinister Purpose” was tackled with furious style by One Mississippi, an Austin band featuring Rob Bernard and Ron Byrd of Prescott Curlywolf and Alex Livingstone of Grand Champeen. Somewhere in the googleweb lurks their cover from Big State Festival in Bryan-College Station, TX, in 2007.

When I was young I was smitten by Elvis and Duane Eddy. Elvis was out and that was like, ‘God, what is this … voodoo or something?’ Elvis on the Dorsey show was just strumming his guitar. I’ve had renewed respect for him in later years. He sure strummed it great. He could really mash the guitar and those old Sun records had a great acoustic sound.”
–John Fogerty, 1997

Creedence makes the Elvis/Sun/early RCA lineage clear on this great cover of Arthur Crudup‘s “My Baby Left Me.” Again, the genius of CCR wasn’t necessarily sophistication and innovation, as much as it was continuing that beautiful southern tradition known as rock ‘n’ roll. Sure, nowadays most people accept the greatness of Sun-era Elvis. But, in the summer of 1970 when Cosmo’s Factory was released? Even considering Elvis’ well-received 1968 Comeback Special, the King may as well have been Jimmie Rodgers, a transformative relic from a very distant past.

Also, to reiterate the importance of Tom Fogerty to the Creedence juju, I offer a comparison to Elvis the guitar player. Wait … guitar player? The pelvis guy??? Yep. But hey, don’t take my word for it. Some guy named Scotty Moore had this to say: “You know, Elvis wasn’t considered a real good rhythm player on guitar, but you listen to ‘That’s All Right, Mama,’ he starts with the rhythm, just the open rhythm, and then the slap (bass) starts. He had a feel for the rhythm on the stuff that we did that’s very hard for anybody to do the same way.”

A real heavy political song. It’s pointing the finger at the Nixon administration when they were crumbling. The dark period, if you will. We were able to get away with it by having the rhythm section that we had. If you wanted to get heavy and get into it, you could do that. If you didn’t want to do that, you could dance all night and pick up a girl or do whatever. We covered all the bases and John would add his brilliant lyrics and took it a step forward.”
–Doug Clifford, 1988

In the old days of Creedence, my aesthetic was more toward less is more, that simple is more powerful. I still feel that way. And I’m very happy with most of the stuff I did with Creedence.”