Aside from any inherent stupidity, let alone the dancing part of the equation, there’s a reason why this quote would gain traction. Most music writing is terrible. Much of it sounds like straight copy-and-paste from publicist one sheets and I know this because I used to get those one sheets. In a way, this is a forgivable sin because I can just chalk it up to laziness and the cost of doing business with the music industry. It’s silly to expect a 150-word album review to revolutionize your way of looking at said album. In theory it can, but if it doesn’t, no one should be surprised.

A more fundamental problem with music writing is that much of it isn’t really about music. Usually it’s about lyrics or a meta-narrative about subjective intent and meaning. If the music is addressed at all, it’s usually as a way to establish genre identification. We might get a passing mention of the various players, but the instrumentalists are bit players who merely frame the songwriter’s thematic concerns. There’s also a tendency for music writing to really be about celebrity and what a given artist has overcome to gain a foothold in the public’s imagination. In other words, music is simply a conduit for telling a narrative of perseverance in a male-dominated industry or how the singer overcame poverty to become an American success story. All of which may be true and inspiring, but it’s not about music.

At the risk of underthinking this, I think the reason so much music writing is not about music is because most writers don’t get music, at least in the fundamental way good music writing requires. They’re probably not musicians and I don’t mean professionally. Any amateur (raises own hand) who has picked guitars with another person knows there’s a level of communication required to make the resulting music harmonious, and without that communication you have fucking noise … and not in the calculated Sonic Youth sense of noise. I wouldn’t say playing an instrument is necessary to good music writing, but it helps.

BEFORE IT PASSES YOU BY

At this point, I should add that I’m not talking about musicians writing technically for musicians. A professional musician writing in Guitar Player knows that his/her audience will be other guitarists. The article will sound like a mechanic talking about a fuel injection system because that’s what it’s supposed to sound like. The average reader may get some of this (raises own hand), but by and large it will be way too technical, and may as well be in another language. Which, of course, it is.

No, what I’m talking about is music writing for the popular culture, and this gets us back to the lyrics problem. Why is so much music writing about lyrics? I think the answer is deceptively simple. Most music writers write about lyrics because that’s what they know, and there’s really no cultural incentive to write more deeply about music. We’re inundated with what Bill Friskics-Warren calls “logocentrism,” the primacy of words over everything else. In high school we’re taught to extrapolate meaning from poems and books and we’re simultaneously taught that pop music (rock and hip-hop, e.g.) is poetry set to music. Meanwhile, unless we specifically take a music class, we have no relationship with music beyond the utterly superficial. So, words win. Lyrics win. Music is merely backdrop to the meta-narrative. 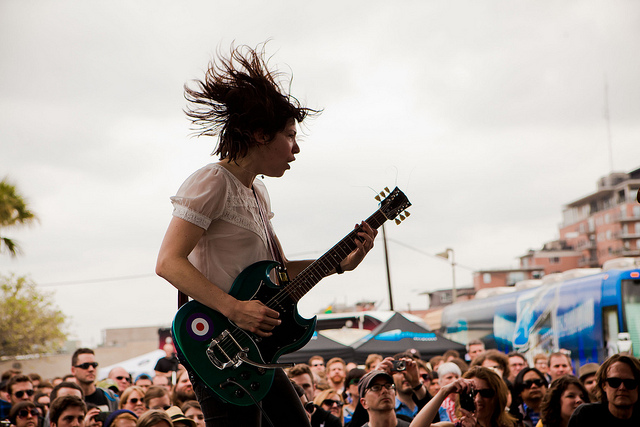 I say all this because I recently read an interview with two members of Wild Flag that perfectly addresses how great music gets made. FYI, Wild Flag is a new group featuring guitarist/vocalist, Carrie Brownstein, and drummer/vocalist, Janet Weiss, from Sleater-Kinney, guitarist/vocalist, Mary Timony, from Helium, and keyboardist/vocalist, Rebecca Cole, who played drums and keys in The Minders. Brownstein and Timony were interviewed for The Onion’s AV Club and were asked about their song “Glass Tambourine,” which goes a little something like this:

Now, here’s the excerpt from that Onion interview:

AVC: “Glass Tambourine” has several discrete sections. Was that one that got pieced together that way?

MT: That was one where I had written a little song, and then I brought it in and it morphed into this thing so much better than if it had stayed in my realm. Especially when we play it live, it’s really fun, because you don’t know what’s going to happen. There’s kind of a map of what happens here and there, but you never really know what’s going to happen with anybody. Carrie and Janet have a thing going on where they’re kind of jamming. I kinda just like fill holes. I actually don’t really know what’s going on. It’s kind of an experiment every night. I feel a little bit out of control, because I’m always messing with this flanger pedal. I get it to make this crazy siren sound by overdriving it. It really is like I don’t know if it’s going to work sometimes.

AVC: Was there a Wild Flag song that came together in a particularly effective way, that made you think, “Yeah, this could be a band”?

CB: The first single that we put out, “Glass Tambourine” and “Future Crimes” — which we’ve re-recorded in a way that I much, much prefer — I feel like those are the two sides of Wild Flag. “Future Crimes” is a much more succinct, disjointed pop song that has elements of pop, but also has this emotional through-line. It’s also very straightforward. And then “Glass Tambourine,” which showcases each of our capabilities. One of the reasons we love being in this band is that all four of us can sing. I’m playing with a guitar player that’s far more accomplished than me. There are moments where each of us can pull back and let somebody else push. It’s being able to play with those dynamics that none of us were able to do before. Mary was always the lead singer and guitarist in her bands, so she had to be singing and soloing and playing all the time, from beginning to end. There’s never a moment where you can just, “Ah, I’m just going to play a chord, you do the heavy lifting.” Or Mary and I can both stop playing, and Janet and Rebecca can play. Rebecca plays bass keys, so we don’t always have to worry about the low end. I think “Glass Tambourine” embodied the places in Wild Flag where we feel very free.

I enjoy the explanation of both songs and sure, it helps that I like the songs themselves. But, the breakdown of “Glass Tambourine” is intriguing in that it gets into the guts of how good music actually gets made. And I mean made in a developmental sense. On one level, creating music has a mysterious, ephemeral quality (“You never really know what’s going to happen with anybody.”), but any band worth a damn knows the strengths and weaknesses of its various members (“I’m playing with a guitar player that’s far more accomplished than me.”). How do they play to the strengths? Alternately, how do they avoid the weaknesses? 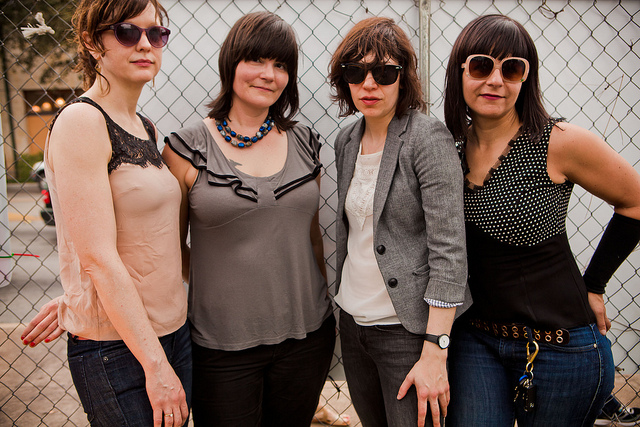 One hallmark of bad music, especially when made by decent musicians, is the kitchen sink problem. (Actually, I call it the Wilco problem, but I don’t want a bunch of dudes with beards and fresh tats to inundate my mailbox with passive-aggressiveness). Anyway, the “kitchen sink problem” is this tendency for modern bands to show off their Pro Tools bag of tricks by inundating our earholes with a million different sonic curveballs. It’s cacophonous jackoffery and slapping some sort of avant-rock label on it doesn’t make it any less shitty. What I love about “Glass Tambourine” is that there’s a lot going on and yet there’s a lot of space for the members of Wild Flag to move around (“There are moments where each of us can pull back and let somebody else push. It’s being able to play with those dynamics that none of us were able to do before.”).

IF YOU DON’T LOSE IT, YOU’RE GONNA USE IT

The song kicks off with a huge riff, then settles into a fairly laid back pop vibe (the harmony vocals and tambourine, presumably not made of glass, help promote said vibe). Weiss’ drums then kick it up a notch (:38), but it’s still basically a pop song. The song takes a noticeable shift toward the awesome at 2:37. Everything drops out except pretty vocal harmonies (“Glass tambourine, glass tambourine…”) and what sounds like a bass takes off on some sort of McCartney-esque mission of awesome. Except that Wild Flag doesn’t have a bassist (“Rebecca plays bass keys, so we don’t always have to worry about the low end.”), so whether it’s bass keys, a drop-tuned guitar, or an undercover bass, it’s funky, it’s poppy, and it totally rocks. By the time Weiss comes back in at 2:54, “Glass Tambourine” has evolved into a different version of the same badass song. Honestly, it reminds me of late ’60s Kinks, which is about as good a compliment as I can deliver.

One thing about a Wild Flag show. You won’t leave feeling cheated. You’re getting 100% whether you like it or not.
Photo: Jessica Amaya via Brooklyn Vegan

I’m not sure if it’s Timony or Brownstein, but at 3:26, a gnarly guitar solo kicks in, spitting out chunks of lesser guitar players, and taking the song to yet another level. Weiss rumbles underneath as she’s wont to do, no doubt waiting for her cue to step it up. That cue is at 3:42, when what has been a song-long build moves into its climactic phase. Timony’s reference to her flanger pedal (“I get it to make this crazy siren sound by overdriving it.”) manifests itself between 4:20-4:40, at which time the Wild Flag assault vehicle glides into its smooth outro.

So, what have we learned today? Hopefully, that bad music writing is a choice, not an inevitability. Maybe it’s just me, but I don’t think writing about music is anymore difficult than writing about anything else, it just requires talent and will. In other words, it doesn’t have to be dancing about architecture. It should seek to engage and challenge the reader to hear music in a different way. We all like what we like, but an effective music writer can get you to reconsider your opinions and might even inspire you to be a better listener. That can’t be a bad thing, can it?

7 comments on “The Crystal Song of Wild Flag”