Home» Black Keys » The Black Keys: No Sleep ‘Til Chulahoma

One good thing about twice driving a 1400-mile stretch of I-10, especially during summer and once with no air conditioning, is that you have lots of quality thinking time before dehydration gives way to talking coyote hallucinations. In my window of lucidity, I enjoyed a few things I’d set aside for the trip, including Neil Young‘s new/old harvesting of the country-rock archives, A Treasure, and Camper Van Beethoven‘s hilarious, vaguely post-apocalyptic prog-folk reimagining of the early Bush years (New Roman Times, 2004). However, the record that surprised me the most was a 2006 EP by The Black Keys.

Chulahoma: The Songs of Junior Kimbrough 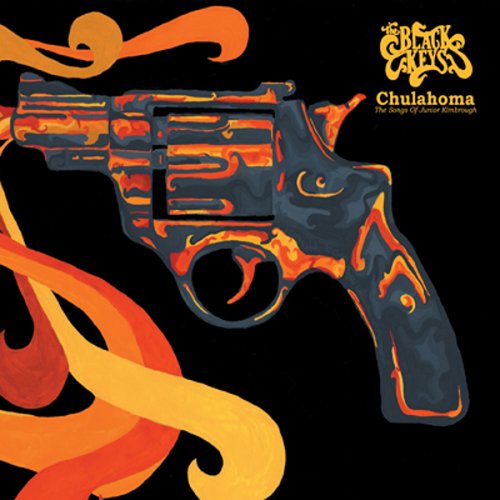 “I feel like a man blessed with some sort of mind and heart connection to the vibrations I find in the music I love. Junior allowed me to feel that way, to open that once hidden doorway. My family steered me in the right direction and pushed me when I needed it, but the walls came tumbling down and the earth shook when I locked into Junior’s groove.”
—Dan Auerbach, channeling Doug Sahm in the Chulahoma liner notes

I didn’t even know Chulahoma existed until finding it at Fingerprint Records in Long Beach. I knew the Keys covered Kimbrough on their early albums, but never really explored the connection. I liked the Keys, but didn’t love them, and more or less lost track of the band until seeing Auerbach play the 2009 ACL Fest totally by chance. I was positioned just across from his stage at the Torchy’s Tacos booth, where I made sure 60,000 goddamn people had pico de gallo.

That set was an unexpected treat, followed a few months later by an urgent cable from Sean Courtney, Duke of Wigginstock, Mississippi. He assured me that “My Last Mistake” from the then-new Auerbach album, Keep It Hid, is like a lost Sahm song and would I like to hear it? Well duh. From there, Brothers was a layup. And yet, until my recent journey into the desert (“I have been meaning to go on a spiritual quest.”) I never really thought about how the Black Keys got to the blues. When I stumbled onto this EP of Kimbrough covers, it all clicked.

Black Keys – Meet Me In The City
Chulahoma: The Songs Of Junior Kimbrough, 2006
Amazon

Chulahoma was Junior’s hometown in Mississippi and I’m pretty sure it’s a Choctaw word meaning “funky, lowdown, backwoods blues.” What I love about the Keys is that while they’re obviously a guitar band, the guitars serve the groove. If there’s a simple genius to the BKs, it’s that Auerbach and drummer, Patrick Carney, never forget to create a fat ass pocket inside of which the guitar solos fit. I like how the reverb here creates space and the lead guitar is used as a harmony voice.

And that pocket brings us back to Junior. What makes Kimbrough historically significant is that until his death on January 17, 1998, he was one of the two most famous practitioners of north Mississippi hill country blues (R.L. Burnside being the other). Where the delta blues typically followed the traditional AAB song structure with regular guitar and harmonica solos, Junior’s hill country blues was about laying down a sweet, hypnotic groove, with guitars spinning out wicked riffs and leads. It was dance music for north Mississippi’s working and drinking classes, meant to be heard in a juke joint on Friday and Saturday night. It’s really tough to capture that undulating quality in a recording, one of the main reasons the hill country blues developed in relative isolation.

“You Better Run” creeps up on you with a brooding, menacing John Lee Hooker* quality appropriate for a song about rape. The musicianship can almost be described as primitive, but eerily compelling music with psychological depth isn’t created by primitives. You can certainly hear what drew Auerbach to it, but he’s tweaked the Junior mojo with positive results (“She’s Long Gone” from Brothers, e.g.). From Kimbrough, Auerbach no doubt learned to emphasize tone, texture, and feel rather than flurries of notes, which is probably why there’s a lot of funk in the Keys’ music.

* The irony of Hooker’s influence is that he was born in Clarksdale, MS, cradle of the delta blues.

Filmed in part at his own club, Junior’s Juke Joint, this is Kimbrough firmly in his element. It’s not about nerdy musicology, it’s about catching a buzz and getting your backfield in motion. This is a wonderful artifact, especially since the club burned down in April 2000, two short years after Kimbrough himself passed away.

I did not want to finish without letting R.L. Burnside have his say. This brilliant 1984 video shows the acoustic side of the hill country sensibility, R.L.’s heavy right thumb driving the song and the open tuning giving it a hypnotic quality. Like Kimbrough, Burnside knew that the rhythm kept people dancing and buying drinks (not necessarily in that order) and he demonstrates that here almost casually. R.L. also developed a unique slide guitar style only hinted at in this video, but maybe I can address that at a later date. But first, one of my favorite interview sequences ever, between Ed Mabe of Perfect Sound Forever and a slightly tipsy Burnside.

Ed: What you gonna open with tonight?

RL: Well, I reckon “Poor Black Mattie.” She ain’t got a change of clothes. Girl got drunk and throwed her clothes outdoors. That was cold, wasn’t it?

Ed: One last question. Can I buy you a drink?

2 comments on “The Black Keys: No Sleep ‘Til Chulahoma”