Y’all should know how much I love Soul Asylum, at least the Soul Asylum who existed from roughly 1986-90. I’ve written about this era of the band here, here, here, and mmm lemme see oh yes, here. And I am well aware that beginning with Grave Dancer’s Union in 1992, the law of diminishing returns enters the picture. However, during the hallowed quatrain of dominance, they were damn near the perfect rock band. Their live shows are deservedly legendary, but the secret weapon turned out to be hidden in plain sight. Dave Pirner and Dan Murphy were damn good songwriters and a great, economical, dual lead/rhythm guitar tandem.

Few tracks illustrate the appeal of Soul Asylum like the “James At 16 (Heavy Medley).” Granted, it’s not meant to be taken THAT seriously. We’re not critiquing In The Aeroplane Over The Sea for doctoral review. We’re talking about an 11:47 onslaught of goofball badassery. It is what it suggests, a medley of 13 cover songs, 1 used twice, from the wildly popular to the willfully obscure.

Sadly, I think “James” itself qualifies as willfully obscure. It was the B-side to the “Standing In The Doorway” 12″, the third single from 1988’s great Hang Time LP, and by all rights should be on the 3-disc A&M compilation, Welcome To The Minority (pictured below). Unfortunately, the fucksticks in charge of this comp didn’t get the memo that CDs last 80 minutes, so you may as well put all the B-sides and rarities on there because, you know, why wouldn’t you do that? And that’s not even factoring in the none-more-black cover art. Dicks. 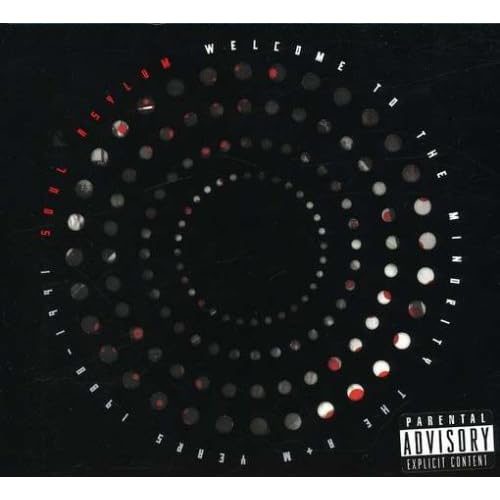 “Oh, you thought this would be a picture of Pirner’s dreamy blue eyes? A&M would like you to fuck off.”

Of course, that’s why The Adios Lounge was invented. If the band’s former label can’t be bothered to give a shit, then allow me to celebrate the beautiful mess that is “James At 16.”

You didn’t think I was done, did you? The Adios Lounge was closed for two months due to R&R (relocation and readjustment), so I feel like I owe y’all some bonus material. To that end, here’s a full dose of music nerd: a reverse engineered “James At 16.” I’ve taken the original 13 songs and edited them together to mirror Soul Asylum’s original medley because, well, that’s what I do. And while it’s not as seamless as the band’s version … for obvious reasons … I think it works pretty well.

It’s tough not to be impressed with the band’s aesthetic and chronological range. Here’s the list of songs again, this time including the year of original release.

That’s 13 songs cutting across multiple genres spanning a 21-year period of pop music history (1967-88). “Stayin’ Alive,” “Play That Funky Music,” and “Get Down Tonight” were obviously goofs in the tradition of “Chevy Van,” “To Sir With Love,” and probably 200 other guilty pleasures in the Soul Asylum repertoire. If there’s any surprise here it’s the lack of “Do a little dance, make a little love, get down tonight” from the KC song. I mean, that’s your moneymaker and they eschewed it for the song’s more atonal qualities. Balls.

“Wishing Well” is also a goof, but it was on the charts when the medley was performed, so it’s more of a topical joke. Incidentally, and I know this is gonna sound shocking, but Introducing The Hardline To Terence Trent D’Arby has not held up well at all. I know, right? “Birth, School, Work, Death” seems like a topical joke because it’s not a very good song, but “Birth, School, Work, Death” is a great line. I’ll give The Godfathers that. That would be an excellent stadium chant. Let’s make that happen.

I seriously doubt Prince was a goof, despite his horribly dated drum and synth sound, and occasional forays into cheeseball. Prince was still in his original prime in ’88 and the motherfucker who put the Minneapolis music scene on the national map. “The Cross” was a great “Purple Rain”-esque song from his then most recent album (and concert film), Sign O’ The Times. I’m putting this in the homage category.

“For What It’s Worth” and “Peaceful Easy Feeling” are interesting references because they represent totemic bookends to that era of LA country-rock. “FWIW” is a little overplayed, but it’s still a great song, and is essentially a punk rock song. Buffalo Springfield cut their teeth at the Whisky, so that’s a pretty cool connection with Soul Asylum. As for The Eagles, it turns out they were a toxic virus created in a rogue CIA lab, at least according to the State Department document to which I was privy. There were heavy reports of infection in some place called Everywhere. That’s how I feel about The Eagles.

In 2012, everyone pretty much accepts the greatness of the Velvet Underground as a given, but in 1988, “I’m Waiting For My Man” was still a ballsy, outsider reference point. You know what changed? The compact disc. Suddenly, you didn’t really have to hunt for The Velvet Underground & Nico, White Light, White Heat or even the upskirt live albums because if you kept driving you’d eventually run into a Tower Records. Not to sound like Old Man Davis, but it’s weird how that’s all changed. The CD store was an extension of the record store and while it was an obsession for me, until roughly 10 years ago, EVERYONE shopped for CDs. Now? Not saying they’ve disappeared, but think about how much iTunes and Amazon have revolutionized how we collectively purchase music. Did I happen to mention get off my lawn?
If the Velvets were a slightly left-of-center reference in 1988, Gang Of Four was off the damn grid. GO4 were English post-punks whose angular, funky screeds (like “Damaged Goods”) were of a piece with fellow Brits like Wire and Public Image Ltd and influenced American punks like the Minutemen and Fugazi. Speaking of punk-meeting-funk, how many rock bands circa 1988 could’ve successfully referenced the Velvets and Gang Of Four on one hand and the Gap Band (“Oops”) and Bootsy Collins (“Body Slam”) on the other? I can think of exactly two: Soul Asylum and the Red Hot Chili Peppers.

Before you scoff, please note that the Chili Peppers’ 1984 debut was produced by GO4 guitarist Andy Gill, who said as recently as last year, “The Red Hot Chili Peppers have obviously based their career on Gang of Four and they’d admit that.” True, false, or somewhere in-between, there ya go.

And that brings us to Theodore Anthony Nugent. Typically, the less said about Ted the better, but you can’t deny the lyrical acumen of, “When in doubt, I whip it out, I got me a rock and roll band, it’s a free-for-all!” I suppose it’s worth mentioning that The Replacements also paid homage to the Motor City Madman on “Gary’s Got A Boner,” which cops Nuge’s “Stranglehold” riff. Now, if you’ll excuse me, I have to go oil my crossbow.

And with that I leave you these parting words from Pirner. While not specifically about the “James” medley, it certainly addresses why the medley may have worked, and maybe why they insinuated themselves into the mainstream.

“We’ve always been not punk rock enough for the punk rockers and too punk rock for the non-punk rockers. I think we’re always gonna be there and that’s pretty much by design. The records sound that way. You get a country song right before a jazz-influenced hardcore thing. You have to be open-minded, I guess, to stomach it all at once.”
–Dave Pirner, 1995