Home» Uncle Tupelo » More Tupelo: This Note’s For You

This is for my buddy, Lex, who bemoaned the lack of Blue Note videos in my recent video history of Uncle Tupelo. Fair enough. The Blue Note is a bar in Columbia, Missouri, the “three hour away town” of “Whiskey Bottle” fame, and according to Factory Belt, UT played there twelve times between 1988-94. Inasmuch as a road show could be considered a home-away-from-home, the Blue Note was it. That said, what up with all the chatty Cathys?!?! I call bullshit. Lex, you need to go back in time and fix this.

“Sauget (So-Jay) Wind” was actually cut during the Still Feel Gone sessions, but kept off the album because it sounded too much like “Whiskey Bottle.” That factoid is straight from Farrar, who I interviewed for The Stranger in winter 1995-96. I think that’s a basically accurate comparison, but how in the hell does sounding like “Whiskey Bottle” turn into a fireable offense? Who fucking thinks that way? I can just see Reprise going to Neil Young during Everybody Knows This Is Nowhere, “Neil … babe … you can have ‘Down By The River’ or you can have ‘Cowgirl,’ but you CANNOT have both. The last thing your fans want to hear are 9-10 minute guitar jams. Now, how about writing something peppy that my 10-year-old granddaughter will like.” 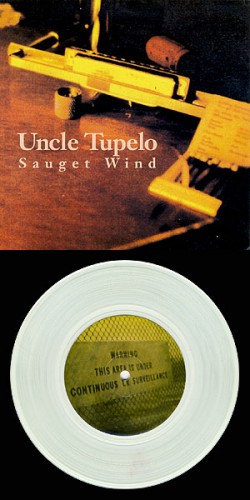 “Sauget Wind” may have been left off SFG, but it was released as a single in spring 1992 on badass, light blue/gray vinyl (pictured left). I think it’s one of three songs where Uncle Tupelo showed their total mastery of the quietLOUDquiet musical dynamic. “Whiskey Bottle” was the first, this was next, and their cover of Creedence‘s “Effigy” is the third.

“Sauget” is basically a folk song with a catalog of social ills: unchecked capitalism, industrial pollution, prescription drug abuse (a decade before that went mainstream), possible cancer and bankruptcy, and if all that wasn’t bad enough, the goddamn weather guy is lying to us! Of course, we also get Jay Farrar’s periodic guitar squalls, or as I like to call it, Farrarmageddon. Think about how great Still Feel Gone is, then add this to it. You’re encroaching on all-time territory with that offering.

It’s waiting in the wings
For damage down the line
Save your tears for the soaps
Leave your money behind.”

WATCHIN’ THE LABEL SPINNIN’ ON MY TURNTABLE 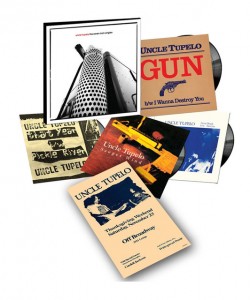 If you’re an Uncle Tupelo fan and vinyl collector you probably already know this. But, you can preorder the long-waited vinyl reissues of No Depression, Still Feel Gone, and March-16-20, 1992, as well as a box set reissue of their three singles and a new single, “That Year” b/w “Pickle River (pictured right). Next Monday, April 23, is the official release date, so I suppose all this stuff will be readily available after than.

In my opinion, these are the three main options for any real Uncle Tupelo fan. You can get the albums or get the singles, but why the hell wouldn’t you just buy it all???

5 comments on “More Tupelo: This Note’s For You”

Amps Have Been Lowered to Half-Stack for Jim Marshall

Jim Marshall, creator of the Marshall stack, died Thursday morning at the age of 88. Of all the men who...