Consider this an addendum to my Lydia Loveless post. When I first started writing about “Jesus Was A Wino,” “Drinkin’ In My Sunday Dress” was a natural point of reference. Unfortunately, after roughly 27 drafts, I realized that the post worked better without it. However, I think the comparison makes sense.

Maria McKee is an obvious antecedent to Lydia. When Maria was 20-21 years old (1984-85), she was a badass country singer/songwriter with a great voice, gleefully mixed punk with country, and was backed by a solid roots-rock band (Lone Justice). By the time “Sunday Dress” came out in 1989, Maria had (sadly) moved on from country music into more earnest, sensitive, almost proto-Lilith Fair territory a thousand miles from the cowpunk golden age. “Sunday Dress” was a kickass throwback, and I previously addressed it in 13 Songs: 1989 Reconsidered. I stand by what I said then.

“This is the Maria McKee I want cloned and kept in a vault. That Voice, plus her spirited appreciation for classic roots music from Hank Williams to X is/was a potent combination. Unfortunately, the woman who could’ve been the cowpunk Patsy Cline was knee deep in her Stevie Nicks phase in 1989. Thankfully, “Sunday Dress” escaped the industry’s lacy, twirling subterfuge. It pays stylistic homage to the heady early days of Lone Justice and looks ahead to 1993’s outstanding You Gotta Sin To Get Saved album.”

FWIW, about a year after the “13 Songs” post, I put together a 40-45 minute audio documentary on early Lone Justice. We’re talking the real deal country-punk stuff that gives their legend some balls/ovaries. The doc is a mix of recordings, live stuff, and radio/TV appearances.

This recording is a more casual version of the studio version, but I like it. Maria is on acoustic guitar and I assume that’s Bruce Brody, her longtime musical foil, on piano. It omits the last verse and hellfire outro, but this three-minute excerpt proves scientifically that Maria McKee was put on this earth to sing country music.

“Our reverend is a kingly soul, repents ‘em on a dime
His bible is not inked in gold, he is not the cheatin’ kind
One Sunday after meetin’ I was in the greetin’ line
He said I’ve seen you from the altar
Gulpin’ down communion wine
Just remember who’s beside you when it’s no business of mine.”

Returning to the song of the day, this verse represents the fundamental difference between “Sunday Dress” and “Jesus Was A Wino.” Both Maria and Lydia use country music to build narratives about drinking, sinning, and how religion intersects with both. But, that’s where the similarities end.

I’VE HAD MY FUN AND NOW I MUST CONFESS 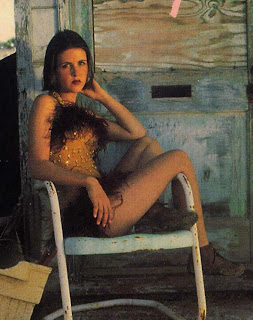 For McKee’s character, religion offers hope and a possible safe place. The reverend is a kingly soul, not a mooch, and extends his support even while knowing that some things are none of his business. By contrast, Loveless’ character sees religion as an overbearing, judgmental presence in her life. The narrator of “Wino” knows that people look down on her for being a drunk, and there’s nary a safe place in sight. What’s interesting to me is that though these songs were written roughly 22 years apart, both women effectively use the vision of wine as alcohol and sacrament to make their respective points. Maria above and Lydia below:

“They’re gonna feel almighty when I can barely stand
I just tell them I couldn’t turn down
One more glass of the blood of the lamb.”

Please note: I’m not claiming that from these songs you can extrapolate each singer’s individual views on religion. They could be snake handlers or atheists for all I know and frankly, that info is besides the point. A singer can use “I” without it being autobiography and fictional narratives can just as easily speak to larger cultural truths as non-fictional narratives. But hey, all this talk of wine has made me thirsty. Is it just me?