Home» Alex Chilton » Like Burning Fire Shut Up In My Bones

Alex Chilton and a burning fire

“His word was in mine heart as a burning fire shut up in my bones/And I was weary with forbearing and I could not stay.”
–Jeremiah, droppin’ lyrical science in King James 20:9

Today we connect the dots between Alex Chilton and a few of his southern contemporaries in the late ’60s and early ’70s. We begin this journey on April 7-8, 1996, in … Glasgow, Scotland??? Damn straight, hippie. On those two nights, Alex played now-legendary gigs at The 13th Note with Teenage Fanclub as his backup band, a formidable collaboration between master and #1 disciples. The 4/8 show was later broadcast on BBC Radio Scotland and remains widely available on torrent sites. Amidst those gigs, the group also found time to cut this video at a local soundstage or at the 13th Note itself.

Please note that the Donkey Kong switch has been set to the ON position.

This performance tells us several things, among them one of Alex Chilton’s most valuable assets. He was a folksinger in the truest sense, keeping great old songs alive in the public consciousness. True, “I Never Found Me A Girl” was a modest hit for Eddie Floyd back in the day, but he wasn’t close to Otis Redding in terms of name recognition in 1996, even less so now. And while “My Heart Stood Still” was a Rodgers & Hart standard, that doesn’t mean much to anyone younger than 50. The beauty of the 13th Note setlist is that they drew upon everyone from Joe Meek and the Everly Brothers to T. Rex and Ernest Tubb. Thus, among his many other talents, Alex Chilton was a missionary for the hidden gem. To wit:

Released in 1962, would anyone be shocked if Paul McCartney or John Lennon were fans of this song when it came out? That cool bridge (“Not a single word was spoken, I can tell you knew”) points straight to 1963-65 Lennon/McCartney (“No Reply,” “All I’ve Got To Do”). Ironically, from a composition standpoint, what he and Lennon were doing was introducing musical elements into The Beatles that were, in fact, Richard Rodgers-esque.

NOTHING MOVES WITHOUT A PUSH

Let’s also raise a glass to Teenage Fanclub. They were an inspired choice as Chilton’s backup band and not just because of their Big Star fandom, though that helped. Rather, at the time they were touring behind arguably their finest album, Grand Prix, and had been touring consistently for the past 5-6 years behind 5 excellent records. By April 1996 they were a well-oiled machine. Whether by luck or cold calculation, the Fannies were a perfectly timed choice to support Alex Chilton. Here’s one of my faves from Grand Prix, a Norman Blake special.

How can you not love this tune??? It demonstrates perfectly that Teenage Fanclub gave Chilton the necessary levels of pop and power (Neil Jung & Crazy Horse, maybe?). Norman Blake and Ray McGinley were legit guitar foils for Alex, but add in bassist, Gerard Love, and that’s *four* different songwriters in one unit (including Chilton) possessing a wondrous ear for melody. Hook City.

The lilting swing in the TFC rhythm section also serves Chilton well, and that’s particularly evident on the tape of the show. Much respect to then-drummer Paul Quinn, but I must again single out Gerry Love for his sweeping, inventive basslines. Speaking of McCartney. Say what you will about Chilton’s artistic unpredictability, the best moments in his career invariably featured a strong rhythm section, or at least emphatic rhythm, and that’s not any different here. You can take the boy outta Memphis, yo.

HERE’S WHERE THE STRINGS COME IN

“I Never Found Me A Girl” was a hit for Eddie Floyd and Stax Records in the summer of 1968. What I like about the Alex Fanclub version is that it goes in a direction that plays to the strengths of Teenage Fanclub. They give Stax a power-pop shine because that’s what they do best and Alex is smart enough to recognize this. And, lest we forget, the original is a great fucking song. Eddie Floyd could sing his ass off.

“The song begins with a gorgeous upper string melody played by violins and violas. Cellos play a subtle countermelody to Floyd’s vocal on the verse, beginning with the line, ‘It’s like burning fire all shut up in my bones.’ Booker (T Jones of the MGs)’ most masterful touch, though, is the employment of the violins playing pizzicato during the guitar break. The effect is exquisite.”
–Rob Bowman, Soulsville USA: The Story of Stax Records, p. 151 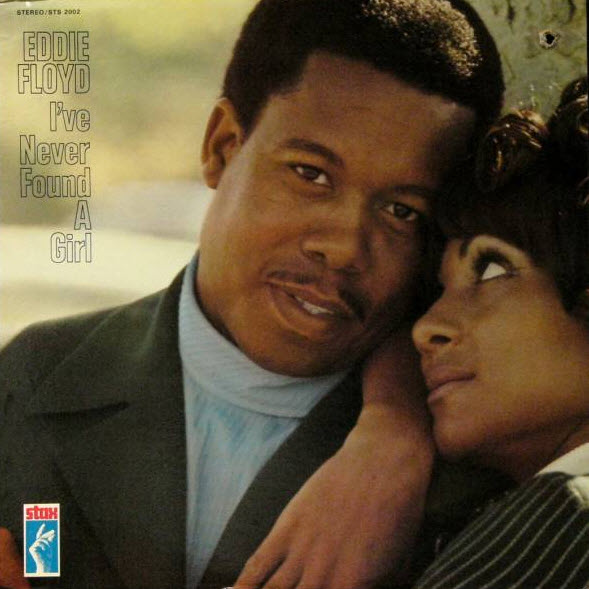 According to Bowman, “Never Found” marks the point where strings became a regular part of the Stax sound, a development that was a direct response to the success of strings at Motown. The song was a collaboration between Floyd, Al Bell (Stax songwriter, producer, and COO), and Booker T. Jones of the MGs. Floyd and Bell conceived of the basic idea, but it was Jones who brought it to life, playing bass, guitar, keyboard, and arranging the strings.

Did you know that Booker T. was a child prodigy on several instruments and directed his high school band all four years there, during which time he also contributed baritone sax to Stax’s first hit (“Cause I Love You,” by Rufus and Carla Thomas), joined Willie Mitchell‘s band (which also happened to feature Al Jacksonon drums), and co-wrote a timeless rock ‘n’ roll classic (“Green MF’in Onions”)? Yeah, me either. He did all that before his 18th birthday. When I was 18, I was learning to do kegstands. Damn overachievers.

This is where the story gets interesting. Guess which Memphians Eddie Floyd and Stax were directly competing against for chart space in July/August 1968? That would be Alex Chilton and The Box Tops. True. “Never Found” was climbing the charts at the same time as “I Met Her In Church,” a song written by Dan Penn and Chips Moman and cut at Moman’s American Studios.

Raise your hand if you hadn’t given this song its just due. “I Met Her In Church” is some of the funkiest white boy soul I’ve ever heard, like Brian Wilson weaned on WDIA. Penn, of course, was the Box Tops producer and he more or less ministered the band’s career to its dispiriting conclusion in 1969-70. Which is why the Alex Fanclub cover of the Penn/Moman classic, “Dark End Of The Street,” is so intriguing. Whatever Chilton’s negative feelings about Dan Penn and his time in the Box Tops — “Well I’m free again to do what I want again/Free again to sing my songs again” — he knew greatness when he heard it. And “Dark End Of The Street” is greatness. That’s just good science.

I’m sure it’s just coincidence that both Alex Chilton and Gram Parsons both drew from the Penn/Moman well. What are the odds that two of the 20th century’s most distinctive southern songwriters would find common ground in one of the 20th century’s most distinctive southern songwriting tandems? The Burritos sound like a blend of James Carr and the Everlys. Alex Fanclub sounds like a combination of the Burritos, “Wichita Lineman,” and “To Love Somebody.” Which is to say, they sound like Slobberbone, who covered “To Love Somebody” on Slippage. If you’re into that whole continuum of quality songwriting thing. I’m weird that way.

I know what you might be thinking. So what if Parsons and Chilton had overlapping tastes? Aside from the venn diagram possibilities, hundreds of other groups covered Penn/Moman songs. It’s not like Big Star covered GP songs. Ummm, you said what now???

They were two southern iconoclasts who chose two very different roads … of the 20,000 available, I presume. And yet, despite their superficial differences, Alex Chilton and Gram Parsons are forever bonded by their southern music roots, that peculiar mix of R&B, country, gospel, and just enough pop to be dangerous. It bonded not just Alex and Gram, but Dan Penn, Chips Moman, Spooner Oldham, Booker T and the MGs, and thousands of other southern musicians of that era, and to a lesser extent since. Why do we not have time machines again?

Again, I’m sure it’s just coincidence that Chilton invoked JC in the wake of Big Star’s “Hot Burrito #2” cover. Don’t worry, atheists and agnostics, this isn’t conversion text. But, the impact of religion in the American experience, particularly the southern musical experience, is profound and beyond category. If nothing else, no gospel, no soul music. Is that what you want??? Yeah, I thought so.

Penn and Oldham get the last word, with Moman’s influence a given. Watch this and ask yourself, “How is Penn not recognized as one of the greatest soul singers ever?” Phenomenal talent on both sides of the ball.

13 comments on “Like Burning Fire Shut Up In My Bones”

This weekend I apply the final coats of paint to my Alex Chilton post, which has morphed beyond its original...