So, I don’t know where the hell this is gonna take me, but in my brother Craig’s memory I’ve decided to do a series of Jimi Hendrix posts. I’ll tackle individual songs, performances, albums, whatever. To be honest, I haven’t really thought it through, but Craig deserves it. Dude was the biggest Jimi fan I know of and Jimi is pretty high on my list as well. Consider this the first missive from “The Adios Lounge Presents Hendrix,” or whatever it’s ultimately gonna be called.

I’m starting with “I Don’t Live Today” because unfortunately, it’s appropriate in theme and tone. However, it’s also my favorite Hendrix song. Well, that or “Voodoo Chile (Slight Return)” or “Castles Made Of Sand” or “Manic Depression” or “Machine Gun” … you get the idea. But, this one is way, way up there. This version from Royal Albert Hall is my second favorite performance of “I Don’t Live Today” — we’ll get to #1 in a bit — and I originally posted the video from YouTube. However, it was taken down within hours of me publishing this post. Thank God copyright lawyers control material that’s long been out of print and therefore only available at exorbitant cost. Way to go, greatest legal system in the world.

Being part Cherokee, Hendrix wrote “I Don’t Live Today” for the American Indian. That’s why the very first thing you hear in this video is his dedication. Of course, the song was also written during the height of the Vietnam War, so Jimi often introduced the song as an homage to soldiers in Vietnam. In fact, in the 1993 reissue of Are You Experienced?, Hendrix is quoted as saying, “‘I Don’t Live Today’ (is) dedicated to all the cats that are trying to struggle, all the self-appointed soldiers in Chicago and Vietnam. There’s nothing that’s gonna stop us. It’s just a hard battle, that’s all.”

That the song is an homage to the American Indian should be obvious immediately. Drummer Mitch Mitchell roars out the gate with a badass 2/4 beat on his tom-toms that clearly emulates an Indian war dance. I love how he deftly pushes and pulls against that beat, punctuating the measures with timely cymbal crashes. I wouldn’t say Mitchell was the secret weapon of the Jimi Hendrix Experience — I think most people with an IQ over 80 realize how great he was — but it’s easy to get lost in Jimi’s lengthy shadow. Make no mistake, though, Hendrix would not have been Hendrix without Mitchell. Noel Redding was a good bassist, but you could’ve put a lesser player in the group and the Experience wouldn’t have suffered. However, there’s a reason that aside from a few sets with Buddy Miles and Band Of Gypsys, Jimi’s drummer from September 1966 until his death in September 1970, was a constant. Mitch Mitchell was a fucking badass who made Jimi a better guitarist, composer, and live musician.

Jimi’s solo from 1:53-2:52 encapsulates the brilliance of the Experience. While Hendrix explores outer space, Redding and Mitchell are right there with him, playing fluid leads underneath the firestorm. In fact, there’s a heavy jazz feel in the way the trio goes in three different (though parallel) directions, but without stepping on each other’s toes. That there’s a LOT going on is clear, but the way the arrangement expertly creates space for each musician is top shelf.

As for the second guitar solo (3:06-3:50) — and literally solo in that Hendrix is unaccompanied — we are pointing ahead in the calendar. Because of that, let’s move on to my favorite version of “I Don’t Live Today,” arguably one of Jimi’s greatest performances ever.

About 20 years ago I interviewed Wayne Kramer of the MC5 and he made a very astute comment. We were discussing Hendrix and he said that what made Jimi great was that he didn’t just play guitar, he played amplifier and electricity. It was such a perceptive observation that I never heard Hendrix the same way again. Playing amp? Of course. But, playing electricity??? Genius. That’s EXACTLY what Jimi did. The San Diego “I Don’t Live Today” is a bit more everything than Royal Albert Hall. The London version is excellent, don’t get me wrong, but this is transcendent. It’s a little tighter, a little faster, and stretches out a little farther. I’ve seen enough music to know that sometimes a band is just on and this was obviously one of those nights. But, I wanna focus on just that middle section beginning at 3:11. This is the breakdown that starts with guitar feedback and Jimi intoning, “Existing … nothing but existing.”

Welcome to the sound of the future. Hendrix had been creating guitarscapes for years, but this solo breakdown (3:11-4:17) took his experimentalist tendencies and added a political component that directly anticipated “The Star-Spangled Banner” at Woodstock (2 1/2 months later) and “Machine Gun” with Band Of Gypsys (7 1/2 months later). Jimi transmogrifies his guitar — and amp and electricity — into a Vietnam War firefight, with planes dropping bombs and bullets whizzing by our heads. While Hendrix is rightly lauded for turning the national anthem into outsider art at Woodstock, that process began here — or was at least first perfected here — when he quotes Francis Scott Key from 3:46-3:52. (Please note that Jimi also quotes The Beatles when he throws down the main riff of “Tomorrow Never Knows” at 5:24.)

These musical passages seem like chaos incarnate, but they’re realized with a master painter’s touch. In fact, you can make a strong argument that all of these Hendrix moments, in toto, are the musical equivalent of Picasso‘s anti-war epic, Guernica (1937). I love that the song ends abruptly with fading machine gun fire. It’s dead quiet for a few beats and then you hear furious applause. It’s as if the audience was rendered mute by Jimi’s incendiary performance and it took a few moments to break the spell. 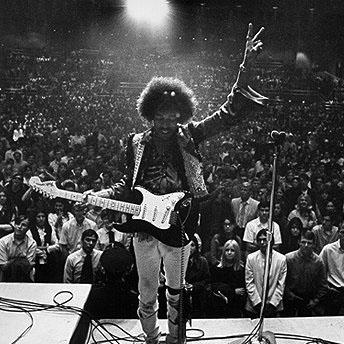 On an amusing tangent, my daughter Lu was throwing an all-time fit over the last hour and Sarah and I tried everything to appease her. Nothing worked. Out of ideas, I started her YouTube playlist thinking that her favorite music would soothe the savage breast. Nope. “Fuck it,” I said. “Kid doesn’t want to hear her music, I’m listening to mine.” Within 2 minutes of hearing the Rolling Thunder portion of “I Don’t Live Today,” she was out like a light. OF COURSE the most violent portion of the Hendrix canon was the thing she needed to pass out. Thanks Jimi!

Dedicated to the memory of Craig Davis (aka “Jimi” aka “Hendrix”).