As 1966 came to a close, The Byrds were in the studio recording songs for Younger Than Yesterday. Chris Hillman, inspired by his recent session work with Letta Mbulu and Hugh Masekela, brought his first songwriting efforts to the studio. I don’t think there’s enough critical appreciation of Hillman’s artistic leap from Fifth Dimension to Younger Than Yesterday. He was an inventive, melodic bassist and provided great harmonies, but in a group with Roger/Jim McGuinn, David Crosby, and Gene Clark, he was a role player. He wrote zero Byrds songs prior to these sessions, only getting songwriting credits on instrumentals and folk rearrangements. And yet, on Younger he unleashed a murderer’s row of excellence: “So You Want to Be a Rock ‘n’ Roll Star” (co-written w/McGuinn and featuring Masakela on trumpet), “Have You Seen Her Face,” “Thoughts And Words,” and two straight-up country-rock songs, “Time Between” and “The Girl With No Name.” For the latter two, Hillman enlisted his old buddy Clarence White to lay down the law. So, he did. 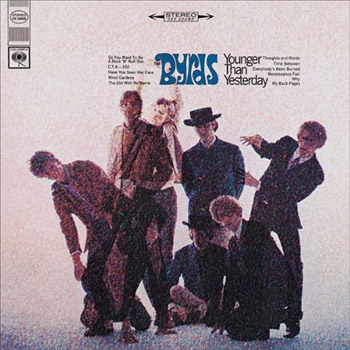 Clarence, panned left, steals the show. The vocal harmonies and insistent right channel maraca is pure Beatles (or Sir Douglas Quintet, with whom The Byrds played many dates in 1965-66). White dominates the left channel, channeling Don Rich and then going way beyond Bakersfield. The solo from 1:13-1:31 is great, but his dive bomber run from :44-:58 is CW turning the corner and figuring out his electric guitar sound. In so doing, he also foreshadows his monster solo on the Gosdin Brothers‘ “Tell Me.”