Huey Meaux died a week ago today (April 23, to be precise) at the age of 82, the last 15 years of which were spent behind bars. We don’t need to immerse ourselves in the specifics of his internment, but I will quote the great prophet, Richard Pryor: “Thank God we have penitentiaries.” It’s not lost on me that I wrote about the unique Meauxjeaux behind Doug Sahm and the Sir Douglas Quintet a mere thirteen days before Huey’s demise. I’m not saying I have superpowers, but let’s all root against any sort of Final Destination scenario. That’s really gonna cut into my future book sales. 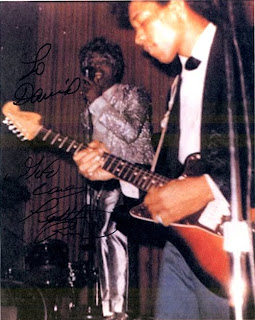 Huey’s death actually got me thinking of the lost opportunity that was the original Quintet. Think about this: “She’s About A Mover” was cut on January 14, 1965, peaking at #15 in mid-June. Over the course of the next 12 months they appeared on Hullabaloo, Shindig, American Bandstand, and Ready Steady Go! They toured the US and Europe with James Brown, The Rolling Stones, Beach Boys, and Little Richard (whose guitarist was a flashy southpaw named Jimi Hendrix, both pictured above right). Then, in late December, the band was arrested for marijuana possession at the Corpus Christi airport and that was the end of that. When the calendar turned to 1966, Doug Sahm had a band in name only.

Obviously, we know what happened next. Doug relocated to San Francisco in March and the reconstituted SDQ went on to create a killer new legacy. But, the staggering versatility that became the Doug Sahm trademark was present in the original Quintet. You just had to know where to look. And Bob Dylan knew where to look.

For the Sir Douglas Quintet to get a glowing endorsement from Bob Dylan in 1965 was a big fucking deal. Dylan was the inscrutable poet messiah at the absolute peak of his powers and here he is enthusiastically talking up the SDQ, who were charting nationally, but still basically a regional outfit. There’s a certain irony in Bob’s endorsement happening at KQED Studios because that location is about 5 minutes away from the Avalon Ballroom, where the Quintet mk2 held court from June 1966 to its closing in November 1968.

Here’s a cool website focusing on Dylan’s press conference. It features an overview of the event, has lots of great pictures, and talks about the various participants, both who they were then and who they became. I never fully appreciated this quote until now. Bob Dylan said it two years ago, but he was reflecting on himself in 1965. He saw his music and Doug’s music as “the same kind of music.” I never looked at it that way before. You think of Bob Dylan in 1965-66 and you figure he’s channeling Woody Guthrie, Chuck Berry, The Beatles, Robert Johnson, Van Gogh, Marlon Brando, and Elvis. The heavy hitters. You don’t think of him reinventing Doug Sahm songs. But, let the records speak for themselves.

The Quintet puts some cowboy funk into the Jimmie Rodgers classic, almost sounding like a proto-Creedence. Rodgers, of course, is one of Dylan’s favorite singers and songwriters, having covered “My Blue-Eyed Jane” for the surprisingly good Rodgers tribute album released in 1997. 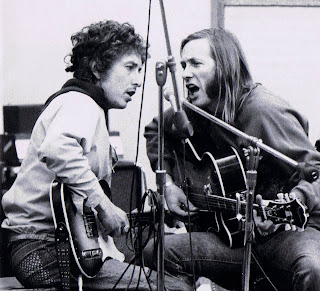 But, Dylan wasn’t just hearing Jimmie’s lyrics. He was hearing Doug and the Quintet attack the beat, often with a shaker or tambourine up in the mix. They probably got it from Bo Diddley, but who can’t you say that about?

Dylan’s lyrics can overwhelm you with their genius, so you may not notice the Sir Douglas fingerprints all over this song. The wiki page for “Buick” references Robert Johnson, Charlie Patton, Big Joe Williams, Sleepy John Estes, The Kinks, and Kokomo Arnold. Only The Kinks is in the ballpark and that’s probably accidental. “Buick” sounds like Bob working within the Sahm framework. albeit with seasoned studio pros, not guys in their early 20s figuring out how to be a band. Al Kooper is essentially playing Augie parts on organ and Bob’s harmonica takes the place of Doug’s guitar. 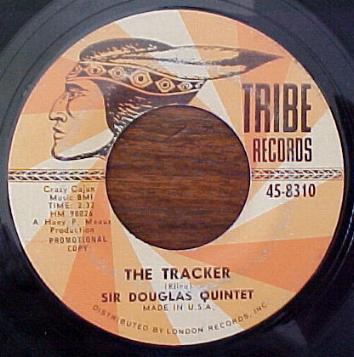 “I’ve got a satellite spy and a radar screen
A private CIA and a fleet of submarines
‘Cause I’m The Tracker.”

A variation on the “Mover” beat, “The Tracker” features one of Doug’s greatest vocals, and Augie makes sweet organ love from 1:13-1:44. Even Doug is taken to exclaim its greatness. Speaking of Bo Diddley, this song doesn’t seem like it’s filled with “I’m A Man”-esque braggadocio because most of the lyrics are garbled. But, if what The Tracker says above is true, dude’s pretty badass.

I think these two are of a piece, in that they’re both blues songs with a rock ‘n’ roll beat in the “I Got A Woman” tradition. “Obviously 5” is special for several reasons, but mainly Robbie Robertson‘s searing guitar leads over Kenny Buttrey‘s swinging drum fills. Blonde On Blonde is epic songwriting at its finest, but it must be nice to look over and see that your guitar player is Robbie Robertson. That’s all I’m saying.

“She Digs My Love” is one the Quintet’s real hidden gems and the secret weapon is a funky bassline, possibly by Jack Barber, but this song was recorded about the time Barber was replaced by future Byrd, John York. Doug opens the song with a cool guitar riff and just enough feedback that I’m entertaining the notion that even brief exposure to Jimi Hendrix rubbed off. An interesting difference between the Dylan and Sahm songs is that Robbie’s guitar is effectively replaced by Frank Morin’s horn parts. From an arrangment standpoint, it’s telling that both bandleaders were smart enough to play to the strengths of their personnel.

The Bob and Doug Mutual Admiration Society aside, let’s throw a little more love Doug’s way. Dylan has enough people (like me) telling him how great he is, the same can’t be said for Sahm.

I love “She’s About A Mover” as much as the next guy, but “Please Just Say So” slays me in a special way. It reminds me of a Ray Price country ballad, but instead of fiddle and pedal steel, the song is carried by Augie’s Vox, Doug’s vox (yeah, I went there), and a walking bassline (again, either Barber or York). Also, great harmony vocals from Morin.

On a personal note, I think this song needs to be covered by The Gourds. Actually, that’s not quite right. The Gourds need to be the backing band and they need to bring Amy Boone from The Damnations out of hiatus to sing lead and play piano. I realize this request is oh so 2001, but it’s a one-off, and my Austin homiez will pick up what I’m putting down. We need to make this happen. Let’s do it for Doug.

Let’s leave on a high note, with one greatest murder ballads ever. Augie is appropriately haunting throughout, but Doug’s singing makes this song. I think we can all agree that Doug Sahm was one of the most soulful white boys ever and he gets Biblical up in this piece. And for those of you keeping score at home, TEN of my favorite singers have stuck the landing on this bad boy: Lead Belly, Bill Monroe, Jimmy Martin, Carter Stanley, and Ralph Stanley, Ira Louvin, Charlie Louvin, Doug Sahm, Mark Lanegan, and Kurt Cobain.