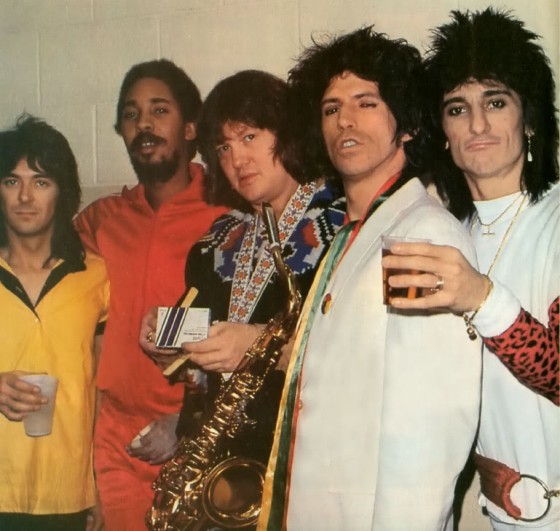 The Adios Lounge was shaken to its core this week when a pair of legendary rock ‘n’ roll sidemen passed away. I’ll offer more thorough rememberances at a later date, but I wanted to get this out there given the importance of these two musicians to my life. On Tuesday, news came through that Bobby Keys, longtime saxman for The Rolling Stones, succumbed to cirrhosis of the liver two weeks shy of his 71st birthday. That was the medical diagnosis anyway. Bobby Keys really died from being Bobby Keys, which is to say he wrung every damn bit of life out of those nearly 71 years.

In my opinion, he and Lee Allen were the two greatest saxophonists in rock ‘n’ roll history, and it’s not all that close. Keys played with Buddy Holly as a teenager, backed Chuck Berry on Hail! Hail! Rock ‘n’ Roll, and recorded at one time or another with every Beatle. However, it was with the Stones that Bobby made his bones, adding his unique tenor color to classic tracks like “Live With Me,” “Brown Sugar,” “Can’t You Hear Me Knocking,” and “Sweet Virginia.” He was also an elemental part of their live shows, touring with the band from 1970-73 and from 1982-2013. It’s fitting that the final word on his death go to his brother from another mother — with whom he shared a birthday, December 18, 1943 — Keith Richards, who tweeted this Tuesday:

A message from Keith on the passing of Bobby Keys. pic.twitter.com/1zHe0ecib5
— Keith Richards (@officialKeef) December 2, 2014

The news about Keys was surprising, but not necessarily shocking. The death the next day of Small Faces and Faces keyboardist, Ian McLagan, was a stunning gutpunch. Official word is that he suffered a severe stroke on Tuesday night, then passed away Wednesday. I’m not gonna lie, I’m still a bit overwhelmed thinking about a world with no Mac. When I lived in Austin from 2000-09, he held down a regular Thursday evening gig at the Lucky Lounge with his group, The Bump Band. I saw them there several times and on two occasions was fortunate enough to chat him up. He was one of the nicest, most gracious musicians I’ve ever met, who acted like he had no idea he was rock royalty. Totally down to earth and always quick to laugh — a high-pitched wheeze that perfectly captured his endearing charm. I couldn’t believe that I was able to sit 10 feet away from the man who helped shape “Cindy Incidentally,” “You’re So Rude,” and the Small Faces obscurity, “Get Yourself Together,” all songs he included in Bump Band sets. To hear that distinctive Hammond organ sound was a thing of beauty and I consider myself one lucky dude to have experienced it up close.

The successive deaths of Keys and McLagan is particularly noteworthy because they both toured and recorded with the Stones, though ironically, rarely at the same time. Mac first appeared on Some Girls — playing Wurlitzer on “Miss You” and organ on “Just My Imagination” — then joined the Stones’ 1978 and 1981 American tours when Bobby was more or less exiled from the Glimmership. However, in 1979, both men toured together in The New Barbarians, a supergroup featuring Keith Richards, Ronnie Wood, jazz bassist Stanley Clarke, and Meters drummer Zig Modeliste. Bobby also played on a couple of Mac albums from this era — Troublemaker (1979) and Bump In The Night (1981). As I said above, I plan on delving deeper into the discographies of both men. But, we can’t let this post end without highlighting why Keys and McLagan mattered culturally, and that’s their music. And what better way to do that then showing them in collaboration. I wish the audio was a little better here, but for pure historical value it can’t be beat. It’s been a rough few days for rock ‘n’ roll, friends. Drink ’em and smoke ’em if you got ’em.

FYI: The bassist for this show was Phil Chen, not Stanley Clarke. The harmonica player who comes out at the very end is Sugar Blue, most famous for his appearance on “Miss You.”

Get Kinked: One For The Road

Link to One For The Road video & annotated setlist below Back on July 4th, I annotated The Kinks' BBC-TV...