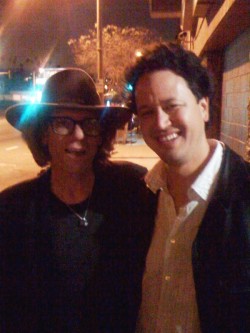 While I finish up my next post, I figured I’d keep you busy with a grab-bag of adiosloungeica.

The Monster’s set at The Echo (Thursday, February 4) was the beautiful mess I expected. Polished? Yeah, not exactly. Well-rehearsed? Of course not. But, when the boys locked into their groove — “See That My Grave Is Kept Clean” and “So What If I Did” — they reminded me why I keep coming back. Every time I’ve seen Thelonious play, there’s always transcendence amidst the dishevelry. God bless a lack of pro gear and pro attitude. FYI, the picture above is me and Bob Forrest taken after the show. Thanks to my homeboy, Tom Engfer, for the mad photo skillz.

For shits and giggles, I jotted down the setlist:

These are my Texas homies and I think you’ll agree that they keep their tricks cheap and voices guided. These two songs come from their new album, The Very Very Best Of Gleeson, which doubles as both greatest hits and debut. Yeah, you read that right. Last week, I saw them play their record release party at the Hole In The Wall — with Channing Lewis of Grand Champeen on guitar/vocals (pictured above right) and Phillip McEachern of Mandible on keys — and was blown away by their teenage fanclub. I don’t just mean they remind me of TFC, but that there was an actual gaggle of cute young girls at the lip of the stage, singing along to every song. When did that happen?!?! Most of the shows I went to in Austin had drunk dudes up front wondering about tunings and pedals. Good for you, Ty (pictured above left).

I’ve talked before about the old oak tree that is Glossary, all deep roots and sturdy, bitter branches. If someone asked for a schematic of modern americana, you could do a billion times worse than sending them to the discography of this Murfreesboro, TN, band. Well, Glossary has just released their sixth album, Feral Fire, and I’ll bet you a six-pack of PBR tallboys that it takes you to your Blue Mountain/Slobberbone/The Band happy place.

Speaking of kickass rock bands, remember my unabashed love for the Reigning Sound? Good. Well, I got a few nuggets of reigning joy to pass along, most of which come from WFMU. That would be New York’s radtastic, anything goes online station that you should bookmark and visit regularly. Back in December, they had the RS come in for an in-studio Christmas set. Here’s the link to those 30 minutes of bliss.

The station also has a playlist called Songs The Reigning Sound Taught Us, a downloadable collection of 1950s-70s obscurata that has been scientifically proven to clean and straighten teeth. You get everything from Sam Cooke and Flamin’ Groovies to Gene Clark and Carl Perkins. 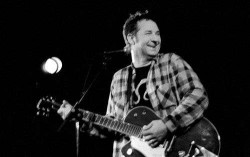 Finally, here’s an interview with bandleader, Greg Cartwright (pictured right), conducted by Turn It Down. Spoiler alert: The dude rules.

Though not musical in nature, the awesomeness of WFMU is confirmed by today’s long feature on early Woody Allen. Decades before the cinematic brilliance of Annie Hall, Crimes And Misdemeanors, and Love And Death, the former Mr. Konigsberg was a writer during the Golden Age of Television, a brilliant standup comedian, and a budding screenwriter/filmmaker. Who talks about this stuff??? WFMU, that’s who.

Did that get your attention??? Yeah, me too. Apparently, an ’80s-era punk rock movie is in pre-production that is seeking to replicate the sounds of the aforementioned Mats and Minutemen while being shot in Memphis. Here’s the story in the Memphis Commerical-Appeal. By the way, have I ever mentioned my incredulity and dismay that the Rock ‘n’ Roll Hall of Fame is not in Memphis? No offense to Cleveland, but Memphis is the only location that makes historical and musical sense. Ugh. I’m moving on before I start a 10,000 word rant and make enemies in the general Lake Erie vicinity.

TIM ROGERS (YOU AM I)

I leave you with a video from the singer of one my favorite ’90s bands, You Am I. Anyone heard of this badass Aussie band?!?! If you have, you’re probably nodding, air guitaring, and saying something like, “Fuck yeah, flapjack!” while fixing a whiskey and coke. Well, here’s their frontman, Tim Rogers, playing a quasi-medley of Who songs (“Christmas/See Me Feel Me”). This was part of an Australian Christmas show this past December and should probably be thought of as alternative Super Bowl halftime show. At least that’s my plan. Enjoy!

6 comments on “Pretty Things Lying on the Floor”