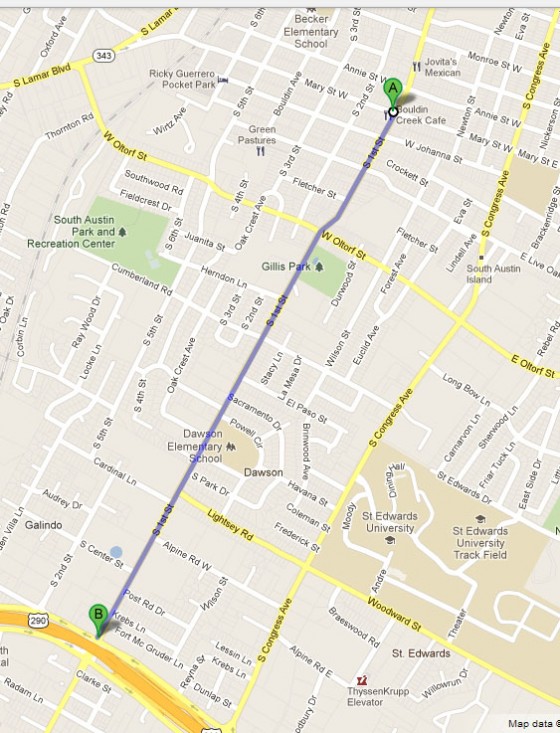 After a week back in Austin, I have rediscovered an essential truth. The tex-mex gods (los dios de texmexicano) send us their tacos, queso, and pico de gallo for our own good. All they ask is 100% devotion to their glorious manna, and once properly appeased, the tex-mex gods will contact the roach gods and tell them to knock their shit off. It’s how things work here and I have no problem with that.

One of Austin’s texiest, mexiest stretches of road is on S 1st St between Ben White and the Torchy’s Trailer Park. The “Tex-Mex Mile” is actually closer to two miles, but let’s face it, ‘mile’ sounds better, and was immortalized as such by The Gourds.

Musically speaking, this is a fairly simple country song about south Austin. However, upon closer inspection the lyrics are fiendishly clever. Nostalgia for bygone Austin is damn near a professional sport around here. However, the song doesn’t just pay homage to old Austin, on a meta level it also pays homage to the idea of paying homage to old Austin. It’s a nostalgia song about nostalgia. So, in that spirit, let me note that while I like the version on Haymaker! (2009), the song was way better back in 2000 when they introduced it at Jovita’s (which, incidentally, is located in the heart of the ‘Tex-Mex Mile’). Nostalgia ain’t what it used to be.

3 comments on “Listen to the South Austin Lullaby”