“I first met (Bob Dylan) in ’65. We’ve had a friendship for a long time. He decided to play on a record I was making in New York. We were just friends playing together.”
–Doug Sahm to Jim Groenenwegen and Bill Bentley, Austin Sun, 1975

With the benefit of hindsight, Bob Dylan and Doug Sahm being friends is a no-brainer. Of course they were friends. If you were either guy, why wouldn’t you wanna be friends? Both men represent all that is good about American music between Ralph Peer and punk rock. If their collective taste were a record collection, you’d kill your own mother for it. Well, maybe not your own mother. Maybe Dick Cheney’s mother, who is half-human, half-chupacabra. True story.

What’s special about the Dylan-Sahm relationship is not so much their similarities, but their differences. Dylan showed Sahm, as he did every musician in the ’60s, that you could get away with writing and performing your own songs, and you didn’t have to adhere to the 3-4 minute pop format. Sahm came from an AM radio, country + R&B = rock ‘n’ roll background, so Dylan’s expanded artistic vision, including acoustic folkie and thin, wild mercury phases, were potent additions to his already strong foundation.

I think for Dylan, Sahm’s appeal was his fearlessness as a bandleader. He could play conjunto one night, juke joint R&B the next, tackle everything from Bob Wills and Lefty Frizzell to James Brown and Jimi Hendrix, and have it all make sense. Doug took probably a thousand different lineups through a hundred disparate strains of American roots music and stayed in control throughout. And you can be sure that Bob noticed. Where Dylan spent years learning how to front a band — and is now the wizened stage buddha — Doug’s natural leadership on the bandstand must’ve been a marvel for the one-time troubadour to behold.

“Down the street the dogs are barkin’
And the time is coming near
Oh, remember Bobby Dylan preached years ago
That men we shouldn’t have no fear.”

Released in December 1969 on the Sir Douglas Quintet’s Together After Five LP, the song is listed as a medley of Dylan’s “One Too Many Mornings” and a Sahm original, “Sing A Happy Song.” I’m not sure this is true. It’s not a real medley, in that Doug really just uses the chord progression of “Mornings.” Even when he quotes the lyrics, they’re less verses than reference points. Actually, I wouldn’t be surprised if Doug was making this up as he went along in a stream-of-consciousness first take. Whatever its origins, it’s an irreverent version of Dylan that had to be met with Bob’s approval. I love the line: “You threw me a curve, but I thought you said we’s playin’ football.” “At that period, he (Dylan) would come to sessions and hang out. While we’re making a take he would wander around and pick up a tambourine, or pick up a brush, or a guitar, or go over to the Fender Rhodes.”
—Jerry Wexler to Bill Bentley, The Genuine Texas Groover liner notes

Dylan and Sahm run through this old Delmore Brothers chestnut on Doug Sahm And Band, one of the greatest recordings in the American roots music canon. It’s an encyclopedia of soulful, Texican, rhythm & twang, produced by Jerry Wexler, who knew a thing or two about such music. “Blues Stay Away From Me” features Dylan on electric guitar, David Bromberg on dobro, and Flaco Jimenez on accordion, with wobbly, but cool Dylan/Sahm vocal harmonies. I love the offhand, almost lo-fi nature of the recording. Doug’s directions merge into Dylan singing, musicians drop in and out, and I even like how they left in Sahm coughing at :50.

“Dylan was a great fan of Doug’s. And Dylan was a fan of Willie Nelson and Dr. John.”
–Jerry Wexler to Bill Bentley, The Genuine Texas Groover liner notes

Without question, my favorite version of Willie Nelson‘s too drunk to tonk masterpiece, “Me And Paul” perfectly illustrates Sahm’s ear for arrangement and talent as a bandleader. Though it’s essentially a three-chord country song, there’s a lot going on. Dylan wheezes on harmonica, Bromberg again picks dobro, Wayne Jackson (trumpet), Willie Bridges (baritone sax), and David “Fathead” Newman (tenor sax) periodically burst in with the Stax-style horns, and above it all, the high, whirling organ of Dr. John. Melodically, there isn’t much to speak of. But rhythmically, the song is deceptively complex, with a funky, largely acoustic syncopation reminiscent of New Orleans music. Sahm orchestrates it all masterfully — possibly with help from Wex — effortlessly combining the best of Texas and Louisiana roots music.

Brinkley errs in the new Rolling Stone when he says that Flaco Jimenez anchored the New York session crew. I think Brinkley was trying too hard to find symmetry between Flaco on Doug Sahm And Band and Dave Hidalgo on the new Dylan album, Together Through Life. Flaco is an awesome force of accordion goodness, but the linchpins of the band were George Rains (drums), Jack Barber (bass), and Augie Meyers (piano, guitar). The rhythm section was always the cornerstone of Sahm’s music and these guys, longtime amigos de musica, gave him the funky pocket he required. It’s not an accident they play on every song and it’s their telepathic fluency in Sahmology that lays the bed for the session hotshots like Flaco, Dr. John, even Dylan.

Lyrically, “Me And Paul” hits close to home for Doug. When Willie writes …

“At the airport in Milwaukee,
They refused to let us board the plane at all,
Well, they said we looked suspicious,
But I think they like to pick on me and Paul.”

… it echoes Sahm’s experience getting busted for pot at Corpus Christi Airport in December 1965. It was that bust that sent Doug packing to San Francisco and it crippled the Quintet just as they gained some national momentum. Don’t leave nothin’ in your clothes, indeed.

That said, “Wallflower” ain’t “Wallflower” without Flaco. Echoing fiddle parts on his accordion, Jimenez wondrously plays off of Sahm and Ken Kosek, who come in with the Bob Wills twin fiddle sound. Bromberg shines as usual on dobro and Augie (piano) and Dr. John (organ) have a cool, Richard Manuel/Garth Hudson keyboard mojo goin’ on.

What else can you say about this lovely Dylan obscurity. Brinkley says it was written for Doug Sahm And Band, but according to Dylan’s Bootleg Series: Volumes 1–3, he originally cut this in November 1971 during the “George Jackson” sessions.

Doug shares the stage with Dylan and the G.E. Smith version of the Dylan band, and while Doug could’ve played the guitar lead, I’m 98% sure that’s G.E. rockin’ the sweet slide licks. While I admit the sound isn’t the best, I think the energy of the audience and quality of musicianship makes up for that. 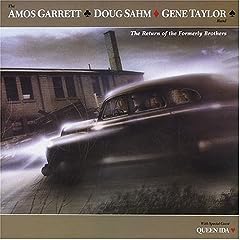 The Return Of The Formerly Brothers, 1988

This performance is noteworthy, too, because it occurred during Doug’s short-lived Canadian phase. Yep, Doug lived on Vancouver Island in the late ’80s, approximately 1987-89. It was in Canada that Doug hooked up with Amos Garrett (guitarist with Ian & Sylvia and Paul Butterfield) and Gene Taylor (pianist for The Blasters and Fabulous Thunderbirds) to create the Formerly Brothers. Supposedly, it was also in Canada where Doug conceived of the Texas Tornados.

Recorded several months after Doug’s death (November 18, 1999), Dylan pays homage to his old buddy. Again, I wish the recording was a little better, but the band locks in tight. I think it was this edition of the Dylan band that helped steer Bob toward the groove-centric roots-rock that had long been Sahm’s specialty. With multi-instrumental badass, Larry Campbell, and rock ‘n’ roll livewire, Charlie Sexton, on guitars and steady Tony Garnier on bass, Dylan had the ideal assemblage of talent to hone his version of a southern/Texas (Texassippi?) juke-joint house band.

Where critics think he’s deconstructing old songs, he instead sees himself as an old-time music arranger. “My band plays a different type of music than anybody else plays,” Dylan says. “We play distinctive rhythms that no other band can play. There are so many of my songs that have been rearranged at this point that I’ve lost track of them myself. We do keep the structures intact to some degree. But the dynamics of the song itself might change from one given night to another because the mathematical process we use allows that.”
–Bob Dylan to Douglas Brinkley, Rolling Stone, May 11, 2009

In other words, Bob Dylan has evolved into Doug Sahm, bandleader and groovemaster. Of course, why wouldn’t he wanna be Doug Sahm? The only question is what took him so long?

“Doug had a heavy frequency and it was in his nerves. It’s like what Charlie Patton says, ‘My God, what solid power.’ I miss Doug. He got caught in the grind. He should still be here.”
–Bob Dylan to Douglas Brinkley, Rolling Stone, May 11, 2009

FYI, all session photos were taken by David Gahr and appear in the liner notes for Doug Sahm & Friends and The Genuine Texas Groover.